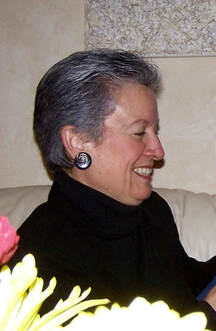 Biography
Raised in Pacific Palisades, Sally Patterson Tubach studied at UCLA, Göttingen and UC Berkeley.  She taught high school in Hawaii and Munich before pursuing advanced degrees at Berkeley, where she received a PhD in German Literature in 1980.  Michael Mann, the youngest son of Thomas Mann, was her dissertation director until his death.  A member of PEN America, she has authored and co-authored fiction and non-fiction books as well as articles and short stories.  She favors projects that challenge conventions and ideologies, that push margins and expand borders towards a more humane world.  She has traveled extensively in Europe and has lived in Germany and France for extended periods.  She received an honorary doctorate from the University of Bordeaux.  She has two adopted stepchildren and four grandchildren, and she lives in Orinda with her writer husband, a UC Berkeley emeritus professor.

The Grand Dame and Hitler’s Twin: A Comedy of Errors (2020). [Picture of book cover below]
Can an elderly literary snob shape a middle-aged dilettante into a man of sufficient substance to neutralize the potential for evil in Hitler’s identical twin? Cranky Myrtle Halstead, a wealthy resident of San Francisco’s most elegant retirement highrise, becomes enamored of a man half her age—the suave and untrustworthy Bruno de Carlo. She resolves to school him in classic literature and turn him into a man of integrity. Unwittingly, she prepares the Italian American for an unprecedented task two decades following her death. He must turn Hitler’s twin brother into a successful painter in order to keep him out of politics and save the world from another global catastrophe. A colorful cast of quirky characters moves the plot forward in a series of humorous missteps and misunderstandings. In this thought-provoking tale, nature and nurture compete over the souls of a jetsetter and of Hitler’s twin brother in contemporary Baghdad by the Bay. In this singular, speculative, and heartwarming story, chance events can have enormous consequences. Find the surprising answer to an intriguing question of historical hindsight: What if Adolf Hitler had had a different profession?

Download a flyer from the publisher about the book HERE.

Press attention for Tubach's novel:
​Praise for her novel:
Testimonial:
Where to buy (click on name to go to site):
Memoirs of a Terrorist (1996) [Picture of book cover below]
Memoirs of a Terrorist is a gripping experimental novel about a young woman raped at the age of fifteen by her father. Having repressed this crime from her conscious awareness, Megan Lloyd's short intense life becomes a quest for sexual and human identity. A privileged daughter from suburban southern California, the heroine writes about early periods of her life in revolutionary Berkeley as well as later events in Malibu, Dallas, Munich, and finally, Paris. Her failure to bring the repressed crime to consciousness reveals a tragic blind spot from which emerges the sexual bondage murder of her lover in a Munich hotel. The heroine's internal story is told by her fragmentary diaries and stories that her father retrieves after her death as a suspected terrorist in Europe. As he approaches his own death years later, Arthur Lloyd attempts to comprehend his daughter by analyzing her texts, and finally confesses his crime to the reader. Thus, two narrative voices, one male and one female, intersect, clash, and reinforce each other in this rich and complex text that weaves a tale of sexual violence and portrays quests for insight and redemption.

Testimonials:
Where to buy:
​